From it's early beginnings, now the Magic Boys is a Benidorm hen party night enjoyed by thousands every year 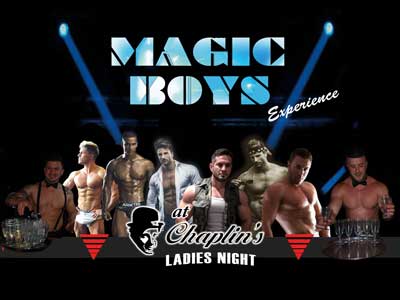 The Magic Boys first began in 2015 as a male stripper trio for large private Bendiorm hen party bookings and has come along way to an awesome 2.5 hour male strip show with up to 8 sexy hunks on our sell out shows. Complete with group routines based on a Magic Mike theme, sexy butler buff waiters, guest male tribute singer while everyone is being seated and a fantastic set of individual performances

We also have a beautiful intimate venue Chaplin's Nightclub and with seating limited to 120 persons everyone is sure to get some special attention form the boys. While everyone is being seated we have a great male tribute singer to keep you entertained and then the Magic Boys come on at 8pm

The Magic Boys and our sexy butlers in the buff will keep you entertained with fire shows, back flips, dance routines and lot and lots of audience participation for those who want it. The boys are very respectful and the emphasis is on fun and sexy, not sleazy. If someone doesn't want to get picked up, they never force the issue unless you change your mind after a shot or two ;) and it is often more hilarious watching your friends get spun around, lifted up and put into some playful cheeky sexual positions. This is a fun show for all ages and is also gay friendly if your hen party has a boy or two, they are sure to be selected also, see our gallery here of a typical male strip show Benidorm, enjoyed by all menbers of the Benidorm hen parties.